I’ve always told myself, no matter how much of a Boy Scout you are while driving, there’s always someone less focused who’s bound to hit you. Tonight’s the night — and it’s raining no less. 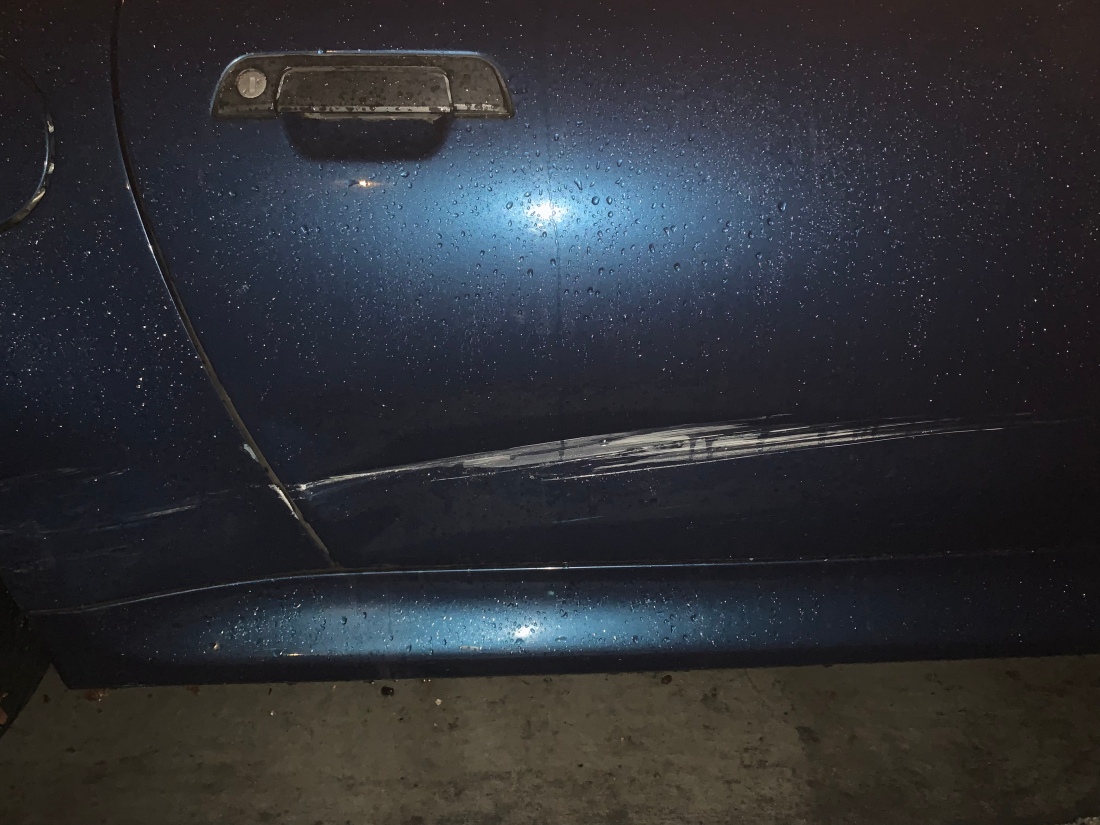 Honestly, I’m hoping and praying insurance takes care of this so I can put this behind me. The lady who hit me only has a bent license plate so this should be pretty cut and dry. I can’t say that about my passenger side door though.

After any bad event, I usually retrace my day in my thoughts to see if I did anything differently than my usual routine. Well, today I stopped for gas at the corner gas station on my way back home. I really should of done this in the morning, but I had neglected to. Did my laziness cause this to happen? No. You tend to combine two unrelated events into one to justify what happened. Today, I’m just very unlucky.

After the initial shock and subtle rise in blood pressure for shouting “WHAT THE FUCK” at the top of my lungs at the lady, I’m more or less fine. She refused to hand over her information until I called for police. Essentially, adding insult to injury. Why a police officer has to come to hand over information is beyond me. On the bright side — if there is one on this cold dark and rainy night — I’m not hurt, no one was injured, and at the end of the day, it’s just an old car that can be fixed. Optimism prevails.

To be fair, my car already had paint peeling on the hood and seemingly everywhere else that I give a closer look to. Now instead of bubbles, I have a nice long white scratch on blue paint. It’s almost artistic. Almost. Hey, I have an excuse to drop $1500 to repaint my entire car. Ha. I’m semi-serious.

I think the only thing I’m bugged about is my family’s lack of concern for my well-being after breaking the news to them. Not so much as a simple “Are you okay?” or even bother to see the damage to my car. They didn’t care then and they obviously wouldn’t care now. I’m flying solo.

I can count the number of unfortunate events that happened to me this year. From having my radiator leak, my tire blowing out on my birthday, to being a passenger in a vehicle involved in an accident, and getting a BS parking ticket — life has a lot of downs. Some days I’m not looking to put up a fight. Hell, I want plain, boring, uneventful days. My old roommate from college said it best, “You’re incapable of being boring. Shit will happen.” I’m tired physically and mentally with bad habits I’m trying to keep under control. Give me a fucking break. Days like this make me think if I need to go back being Christian and believing in Jesus — yeah right.